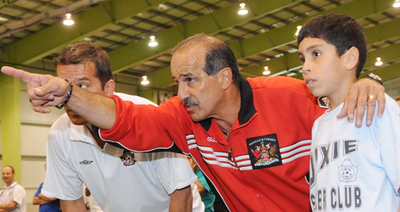 Our special guest and Caribbean Mentor has embraced his mission to encourage and empower young people to face the challenges of the modern world. And he does this mainly through sport; particularly football or soccer as it is also called. He has six degrees which includes four Masters and is currently working on his Doctorate. He has over 40 years’ experience in Sport Administration and Coaching. He has received Awards of Recognition from T&T, Canada, and the U.S. for his many contributions to sports, culture, and youth development. Under his direction many student-athletes have gone on to play at the highest levels around the world and have also become role-models off the field in their roles as husbands, fathers, and community members. Among his many coaching assignments, he has been in charge of Youth and Senior National Teams of which his last was as Technical Director/Head Men’s Soccer Coach at the Trinidad & Tobago Football Federation. He is a proud husband of 35 years, a devout father of four and grandfather of five. He firmly believes in spending time with the elderly for counsel whom he calls, “the fountain of wisdom”. Ladies and gentlemen…Caribbean nation…Let’s meet Mr. Hannibal Najjar